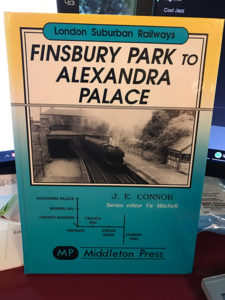 Back in the seventies I went to high school in a part of north London called Highgate. Highgate is a leafy suburb perched high up on a hill next to Hampstead Heath. Near the school, of particular interest to me, was this recently (for the seventies) abandoned station set between two tunnels opposite Highgate underground (tube) station. I don’t think I ever broke into the station grounds but by peering over the fence above I do remember seeing London Transport signs on the platform. This then raised the question of how or why was it connected to the London Underground system and when and why was it abandoned? Long before the internet this held a particular fascination for me. Then with the rise of the internet and information online made available by other trainspotters like myself the mystery was solved. 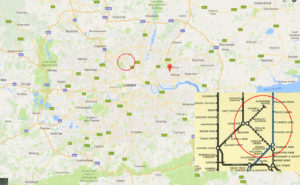 I discovered that the station was part of a larger system that once took trains as far away as Edgware in outer North West London. There was also a branch to Alexandra Park – a historic entertainment venue – located about two or three miles away from Highgate. There is plenty of information to be found online so I’ll just briefly summarize the history. The line was built in 1867 and was reasonably successful until after the First World War whereafter both motorized vehicles and the electric tram system took away much of the passenger traffic. In the mid 1930s a scheme was announced to electrify the line and connect it to the London Underground system – one of the reasons for Underground Railway signs spotted about the platforms. Unfortunately the line never got electrified as the Second World War ended any further development. After the war, the line’s traffic being so low, the ‘tubification’ of the line was cancelled completely and the last train ran in 1954. The track was lifted from Highgate station as late as 1972 since the line was still being used to move Tube stock between depots. I missed seeing the track by only four years! 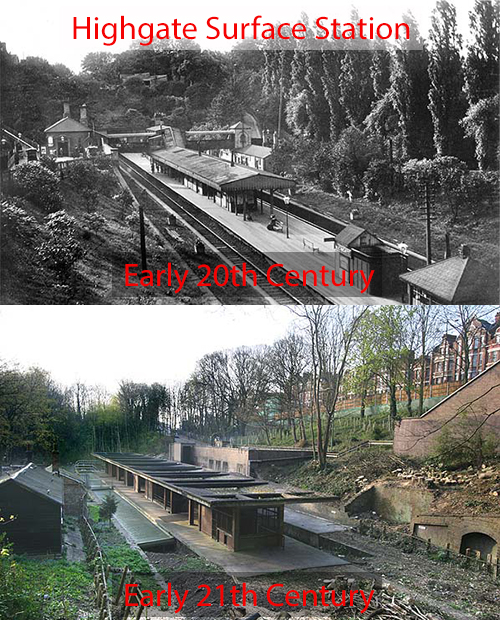 I came across this book on the subject: Finsbury Park to Alexandra Palace by J. E. Connor and published by the Middleton Press. The book covers the usual history of construction, operation, struggles and eventual closure. It also contains some fascinating images of the line in Victorian times when much of the surrounding land was still countryside. There are pictures of station buildings in their original form many of which Google Maps street view indicates are still standing. Other pictures display the steam workings of the line by the Great Northern railway, the London and North Eastern railway and finally British Rail with an interesting mix of locomotives and rolling stock. There are maps of the route and track layouts of the stations. There are summaries of the history of the line and in particular of the Alexandra Palace (I lived near ‘Ali Pali’for a couple of years). The book is a very light study of the line which can be filled out further from various online sources.

A couple of items caught my eye:

As much as I consider myself to be primarily an American modeler I’ve never lost my interest in British Railways. I favor the late steam/early green BR period (the UK’s transition period) and I have occasionally wanted to build some sort of model in that era. My recent communications with the Scalefour society in London brought back a few memories of British railway modeling and in a small way reignited some interest. I’m still at the pre-planning stage so I don’t have any idea of what I might build but maybe something based on this line? Anyhow I’ve kept the book by my side this week both to provide inspiration and bring back to memories of my high school years. I’ll post more on this subject as I develop my ideas.