First step in this process was to start adding physical changes to the model. This is a very important stage as it represents the first step away from the finish of the original manufactured model and immediately gives the piece its own identity.

The marks represent what I have previously called ‘short-term specific weathering events’ and will be treated slightly differently from other areas of the model. The damage may have been sudden or over a time period but whichever way it has led to a unique effect that has occurred faster than the weathering elsewhere. This is an important detail that can be represented on any model from boxcars to oil tankers.

Looking closely at the prototype I noticed that wooden slats can get damaged in place. The wood is pitted, gouged out, chipped, stripped and generally worn while metal can be bent, rusted, and pitted. I found a couple of examples of this kind of weathering:

With these pictures in front of me I added marks, pits, gouges and general wear to the model. Here is the result:

I suppose I could have used paint to represent these same events, but you can’t beat the natural 3D look of a real ‘battering’. The texture is unmistakable and eventually adds much character and realism to the final model.

With that first step out the way I took a good look at the model and decided on a plan of action for the painting.

Firstly as this is a test model and not a ‘final’ I decided to create practice areas on the model – each area would get a different treatment until I found the perfect technique to achieve the correct result. I masked the model off until only one area was visible and gave the model a base coat spray. 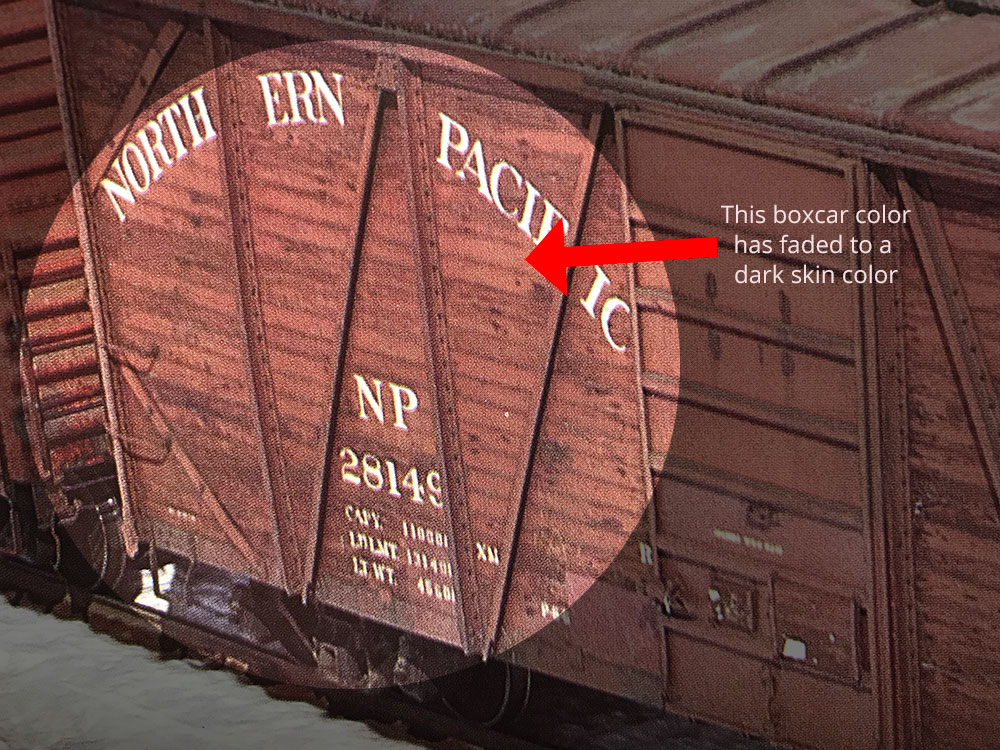 I went back to my photo and tried to figure out the first step. I’ve noticed that modelers try to start with the paint fade before doing anything else. I decided to do the same. The boxcar paint on this Northern Pacific boxcar has faded in places to a dark skin color. This was my starting point. I decided to try to fade my starting boxcar red to this skin color.

I’m really try to do modeling experiments away from the main project. On The Trestle I created ‘landscape scratchpads’ and other tools to help me to figure out how materials should be used or what effect would result from a particular method. For this weathering project I created ‘weathering cards’ – little plastic cards with notes on the back identifying the technique used, the paint, the layers, the brushwork. As a web programmer I have to do this kind of testing and note taking to solve programming problems. I may not come back to a program for a couple of years so stored notes get me up to speed very quickly .  These test cards do the same. A few months ago during  a break from modeling I spent an afternoon experimenting with paint to create the perfect fade. I used enamels, I used acrylics, I used ink, I used water thinner, alcohol thinner, paint thinner etc and created a set of fade cards which I could now refer to.

I decided that I would alternate between enamels and acrylics for each layer. On this model I laid down a fade of white acrylic. Big mistake. It looked awful – like icing on a cake – the surface looked like it was embedded in ice. I didn’t take any photos of it and I stripped it off immediately with alcohol while leaving the enamel undercoat in place.

Next attempt was to go dark instead. Using a brush, I painted on a black acrylic which I then rubbed away with alcohol. It certainly looked better than before but now made the model too dark. I was quickly moving away from (and not towards) the skin color I wanted. Nevertheless I was curious to see how the model ended up after I added more paint and so I continued to play around with it.

The problem however is the fact that was now moving into the territory of ‘artistic tangent’ whereby the model looks like a pleasant and well-produced impression of a weathered prototype instead of a miniature version of the real thing. I wanted the latter effect so it was back to the drawing board for me.

To be continued soon.