END_OF_DOCUMENT_TOKEN_TO_BE_REPLACED

I went cycling on the Lassen and Fernley railroad near Susanville CA recently. This old logging railroad runs alongside a river I so I was able to take pictures of the wide variety of plants around the water. The challenge will be to figure out how to model some of this plant-life.

END_OF_DOCUMENT_TOKEN_TO_BE_REPLACED

I’ve spent the last couple of weeks detailing out the creek bed. It’s a process of layering primarily. I added one class of vegetation (such as grass tufts) each evening and then saw how that looked before continuing with a different class of vegetation (such as flowers). Things are slowly coming together. I’m not sure now if I need to keep working at it. I’m just about ready to add water. While I wait for the Woodland Scenics water to arrive I’ve been working on small details elsewhere – adding a vine to the trestle and flowers here and there. I may still add a fence to the east side to balance things out a little. I’ll do that over the weekend. 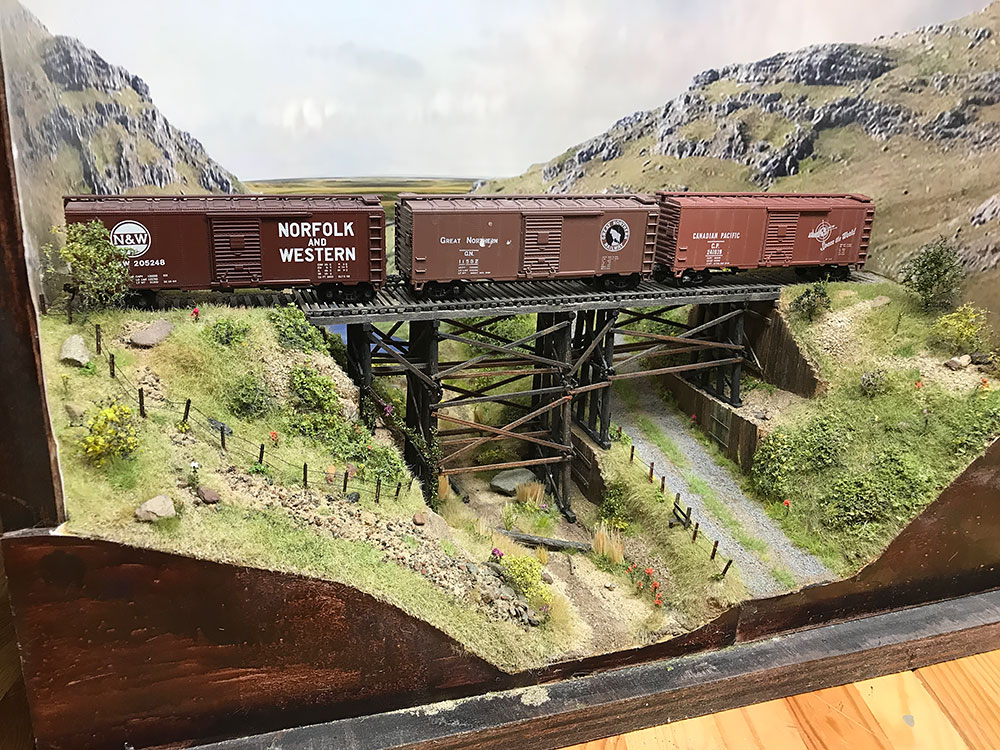 END_OF_DOCUMENT_TOKEN_TO_BE_REPLACED

So tonight I spent some time adding flowers and plants. Things are coming together slowly. I’m carefully positioning all the elements to try to create nicely composed scene. A rock here, a stone there, some weeds here, some grass there – it should all combine to create a credible picture but one that is nice to look at too. I’m enjoying finding that balance between real life and a pretty picture.

END_OF_DOCUMENT_TOKEN_TO_BE_REPLACED

I’ve put together a section called ‘Current Projects’ where I keep a diary of the various projects within The Depot universe. Presently these include The Trestle and The Town. I’m currently putting together The Town diary but I’ve finished The Trestle up to the creekbed construction. I’ll add sections as the projects progress.

So I’ve started working on the creek. I ‘sat’ on the project for a few days working up some inspiration and then decided to just start. I’ve been wondering what to do here. I mainly want there to be a mix of colors and textures that change within a very short distance of one another. My materials are static grass of various colors and lengths, sand and stone of various textures and shades, miniature flowers, miniature reeds/rushes and then the usual flock and paint etc. That’s not alot of materials to work with but it’s a start so let’s how I do.

END_OF_DOCUMENT_TOKEN_TO_BE_REPLACED

It is now finished. No doubt I’ll keep tweaking it by adding flowers and colors but for now enough is done for me to really focus on the creek bed.

I wanted to add a scree. A real scree of course will have formed out of broken rocks from a rock face located above the scree. The embankment has no such source of rocks so I created a story of an earth slippage caused by rain that created a scar in the soil. Once that was in place I just added the vegetation around.

By now I actually have bunch of techniques at my service so I had much more control over how this side came together. As such it looks more realistic and there is a clear story being told about the trestle and embankment. I’m very pleased with it and feel ready to move on. My only small complaint is that there is not enough range in color ie too much green but I’ll need to experiment more at a later date with a wider range of colors before applying more color to future models. 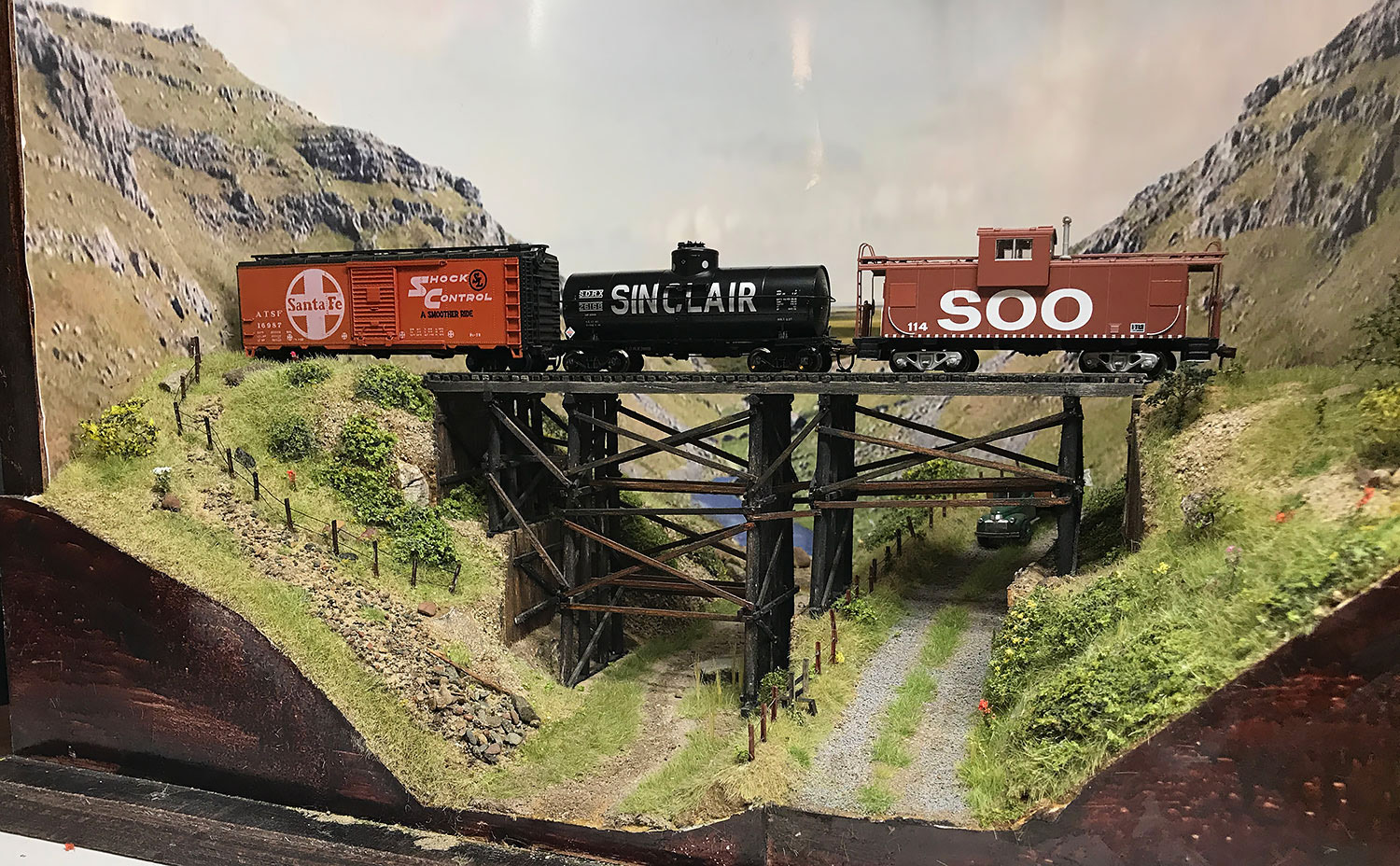 END_OF_DOCUMENT_TOKEN_TO_BE_REPLACED

I added a fence to the west side embankment. I used the same fence type as the road: code 50 rail drilled with holes and then strung with wire. I also added some vegetation. Still more to do such as add small bushes and the odd flower. 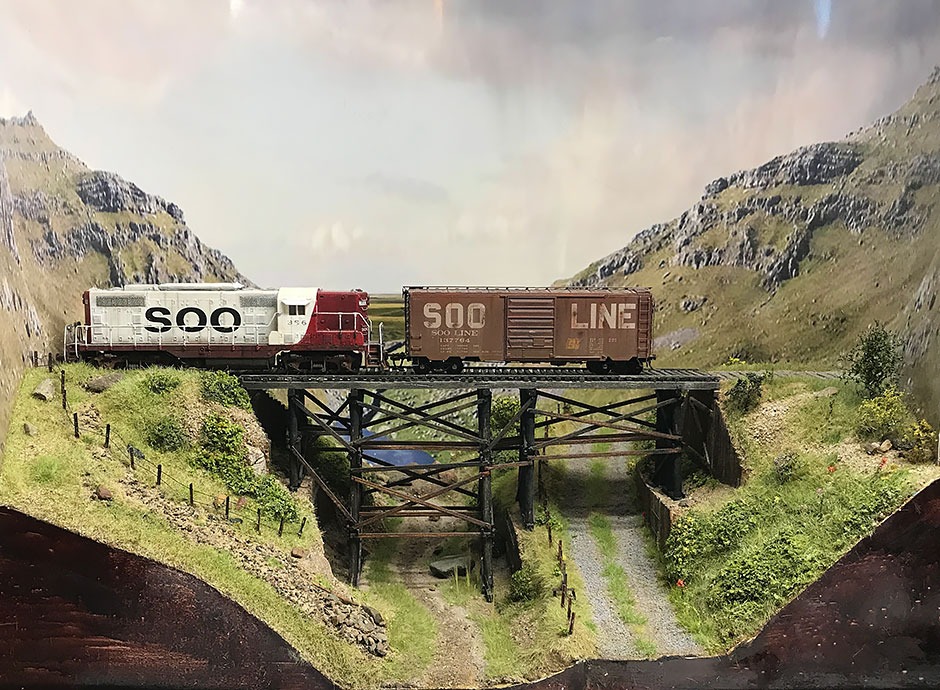 END_OF_DOCUMENT_TOKEN_TO_BE_REPLACED

I continue to plug away at the diorama and spent this week working on the westside embankment. I wanted to add a scree. A real scree of course will have formed out of broken rocks from a rock face located above the scree. The embankment has no such source of rocks so I created a story of an earth slippage caused by rain that created a scar in the soil. I’m not finished, this is just the first treatment to get the scar in place and surround with a variety of grass. I’m ready to add the remaining vegetation plus a small fence similar to the one on the opposite bank. Still lots to do but I’m enjoying taking my time and working on small areas bit by bit. 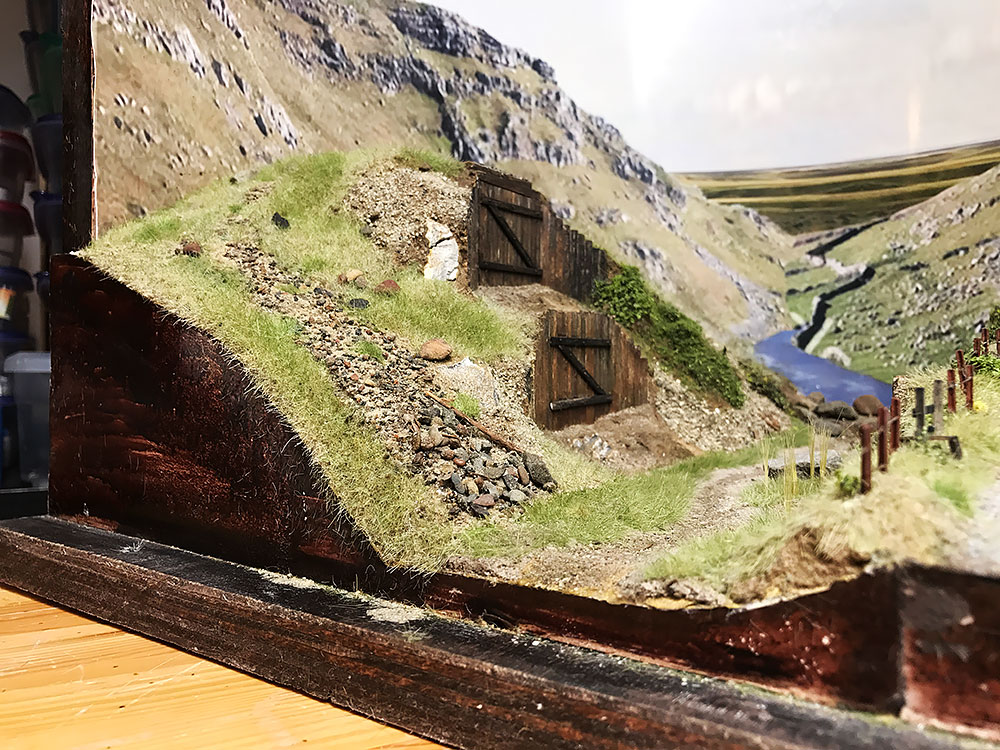 END_OF_DOCUMENT_TOKEN_TO_BE_REPLACED

I managed to finish the fence tonight and I am very happy with it. I plucked out some some thin strands of wire from some metal bailing wire which I strung between the posts. The final effect is perfect. I also added a small stile gate to break up the fence a little and  provide something interesting to focus the eye on.