The next major destination on this trip was the ghost town of Flanigan. This location was the point that the Modoc crossed the Western Pacific mainline and continued north. In 1963 the Southern Pacific came to an arrangement with its rival to divert Modoc Line trains onto the WP and connect with the SP mainline at Weso (about 151 miles away). It allowed the SP to abandon the Flanigan to to Fernley section (the section I had just driven alongside) saving 58 miles of maintenance on a little-used line.

Flanigan was established in 1912 by land speculators who expected the area to blossom with the crossing of the Western Pacific by the newly built Fernley and Lassen Railroad. Lots were  sold, a hotel was built, and eventually stores and a post office were established. A boxcar was installed to provide basic LCL facilities for surrounding farmers. But the lack of freshwater proved to be the town’s ‘Achilles heel’ and was a major factor in its eventual demise. The last resident moved out in 1969. A few abandoned buildings remained in place until destroyed by a brush fire in the 1980s. By the time I arrived there was very little to indicate that anyone had ever lived there at all.

Flanigan is completely off the beaten track. There are no paved roads in this part of the state and I drove for nearly an hour on deserted gravel roads until I reached my destination. I had to take a couple of small precautions before setting off: firstly I made sure I had a full tank of gas. I’ve been caught in the past where an inch on the map turns out to be hours of driving in the wilderness with no stores, gas stations, or signs of civilization whatsoever. Secondly I downloaded all the area maps onto my phone while I still had a signal. Once I was off the main highway I was no longer in contact with the outside world. The GPS on my phone still worked and together with the downloaded maps I was able to navigate easily around the various roads in the area.

Because I was running out of gas I couldn’t take the gravel road from Pyramid Lake to Flanigan. Instead I had to detour back to Reno, fill up with gas, and head up the Nevada-California border to a location called Doyle. First stop was the crossing of the Western Pacific mainline which at this point was heading south. I’ll meet it again at Flanigan in an hours time.

From this point on I was firmly in desert-like conditions. I drove for nearly an hour on dirt track roads to get to Flanigan. I was a little apprehensive about leaving the main highway but three cars passed me by on the way so I knew that I was not totally on my own – which was somewhat of a relief. 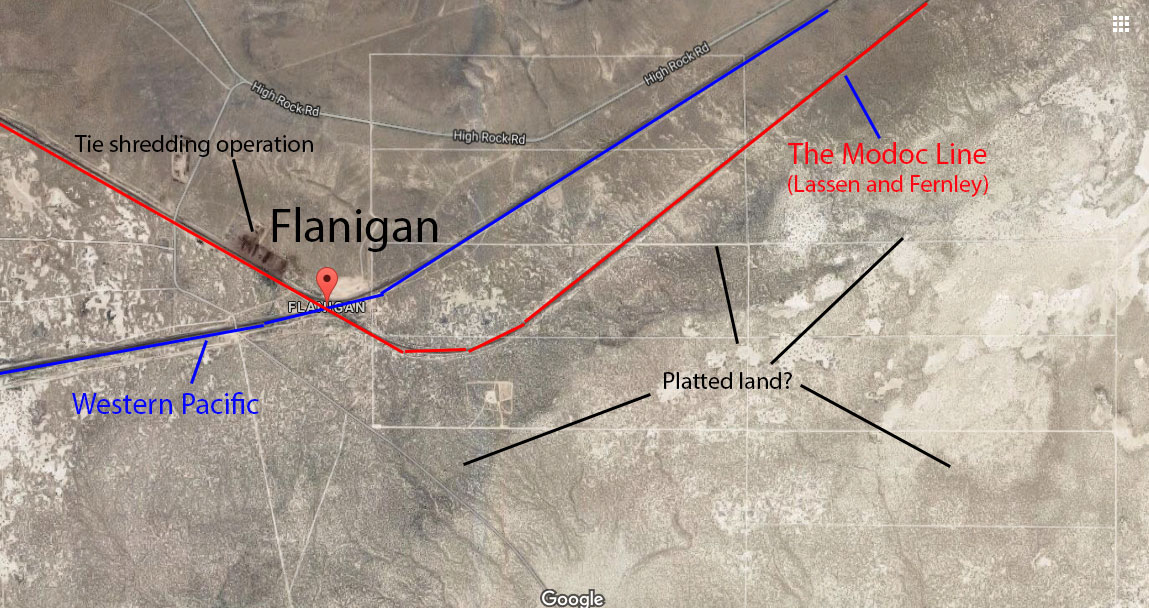 After a lonely hours drive from the main highway I finally arrived at Flanigan. If I had not had my GPS to guide me I probably would have gone right past it. There really is nothing left of the town at all. Only the satellite view of the area reveals strange markings in the soil that look like platting tracks/roads and were probably made by past speculators/owners of the settlement.

There are no buildings, no paved roads and no people. It is an incredibly lonely spot with just the sound of the wind and birds. I absolutely loved being there on my own. Coming from a busy urban environment it is rare that I find myself in such an empty and quiet space.

But although the town was gone, the railroad was still there. Well, the original Western Pacific mainline (now Union Pacific) continues through the area, but the Lassen and Fernley or Modoc Line has been removed. All that remains are a couple of spurs that lead to a tie shredding operation.

The original mainline was diverted onto the Western Pacific and the southern section to Fernley was abandoned in 1963. The remaining Modoc Line ran its last scheduled train through here in 1997.  Trains continued to run through here to Wendel but there were no more through trains to Klamath Falls. The line was either mothballed, abandoned, or sold off.

Overall this was my favorite part of the trip. Flanigan is located in a wild and lonely part of the state that I found soulful and stirring. I’ve been thinking about it since my return and look forward to returning and spending more time looking at the remains of the town.