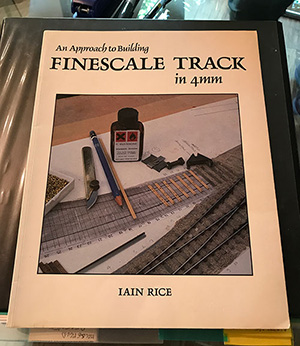 I read the book back in the nineties when it was first published and of course that means that the book is over twenty five years old. I was not yet a modeler but decided that when I started modeling I was going to ‘have a go’ at finescale track using the methods described. My plans got derailed by a move to the States and switch to USA modeling.

I forgot about the book until recently when in the midst of trying to design a better method to lay track I remembered a method Iain Rice discussed in the finescale track book which I thought might be worth trying. I bought a used copy from Ebay UK and had it sent to me along with a bunch of other Rice books that I will discuss another time.

The book covers mainly British bullhead rail with its bulbous chunky chairs – not at all like USA track with its flat bottom rail and flat chairs with spikes. But despite this the information contained within its pages is of great use to modelers of any country’s railways. Iain Rice’s quirky style of writing takes a little getting used to but once you get into the flow of things you discover a book full of highly detailed information about the prototype and the ways to model it. 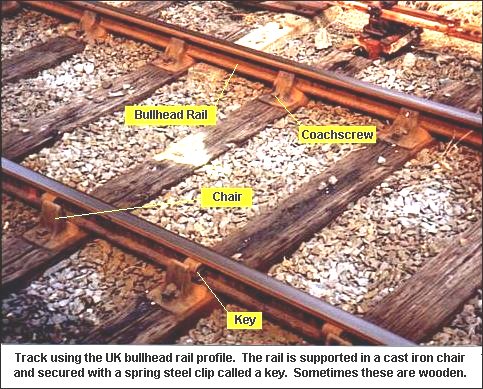 Iain Rice covers the history of full-size British track, the history of model British track since the war, and the subsequent development of the British finescale movement. But the chapters I was most interested in were the ones on the mechanics and theory behind the functions of the moving parts (turnouts, wheels and rails), and the construction process of the model version including the tools required and the different available methods. There are also chapters on wiring and how to build non-standard trackwork such as crossovers and slips.

Not surprisingly trackwork has a complicated and subtle functioning of components and he discusses some of the physics behind this (not too difficult to follow) and why it is important for a modeler to understand how it all works. In providing this information I feel that he gives the reader a solid theoretical foundation to the modeling of railway track.

Modeling in HO finescale has always been a goal of mine but I didn’t want move in that direction until I had a few hand-laid layouts under my belt. Now that I’m on my second hand-laid layout I’ll probably apply finescale methods to the next module. The finescale movement in the U.K. is highly developed with range of suppliers of wheels and track-building tools and materials. There are several methods of building finescale track and it can also be bought ready-made in the form of flexible track. I have yet to do any research into HO finescale so I can’t yet say what kind of support I’ll be able to find.

So why did I buy the book?

The book discusses a method that I was particularly interested in: the use of metal rivets to lay track. The rivet method involves drilling two holes into a tie (called a sleeper in the UK) into which are fitted rivets. Rails are placed on top of each rivet and soldered to them. The rivets and soldering are then hidden behind chairs.

I’ve used two methods for track-laying so far: using spikes (on The Depot) and PCB ties (on The Town). Neither are entirely satisfactory. The spikes look too conspicuous and are not rock solid stable, and the PCB ties do not have a wood grain and are difficult to weather. With the rivet method I could have the best of both worlds: I get to keep using wooden ties but I get the stability of soldering.

I wrote to the finescale society in London – the Scalefour Society – and joined up. I now have access to their stores in which they supply all the necessary tools – including rivets . Not all can be translated: the British finescale gauge is 18.83mm which is too wide for HO (which is 16.5mm) and their track components are different using bullhead rail and chunky chairs. However the rivets and rivet methods I might be able to use. I’m going to order rivets this week and within two weeks I’ll be able to see if they are going to help or hinder.

At some point in the future I would like to build a small P4 (Protofour=finescale) British prototype layout: maybe a small tuning-fork micro or something. By doing so I can follow Iain Rice’s steps more closely and hopefully produce something as wonderful as his own trackwork.

I’ll admit to skipping some chapters such as those wiring and building slips but at least I know where to get this information should I need it. But all-in-all a great read and it has absolutely impacted my current tracklaying methodology.

Here are a few pics to inspire you to purchase the book on Ebay UK (I got mine for about $25 including shipping):