The final turnout went smoothly. I’m going to add some of the missing pieces such as the crossbars and lead-in tracks during the wiring.

It’s time to assemble the trackwork jigsaw. I don’t have time to glue it down today but each evening this week I’ll stick one section down so that by next weekend they will all be glued down. I’ll then be ready to move to the next section of work.

The individual pieces are designed to fit together like a jigsaw. I built the track on top of a templot template drawing so that I would have an accurate join of the sections. 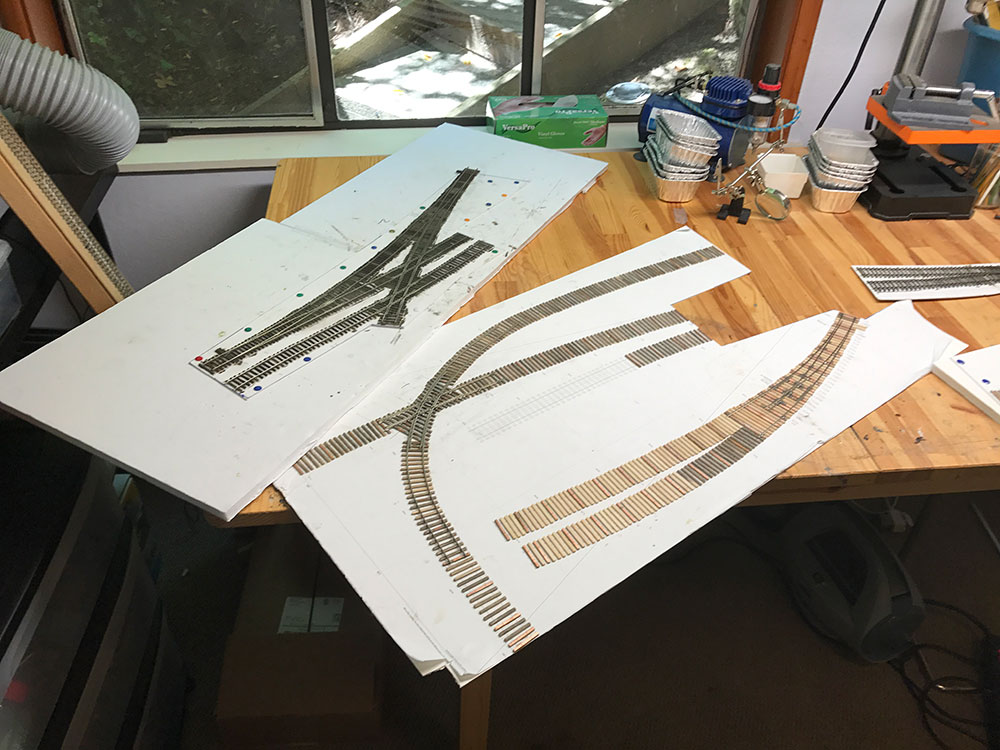 The geometry of the track was really important. I really wanted to capture those nicely eased curves that you often see on the real railroads. It is one of the reasons I decided to build my own track and not use commercial track: I could guarantee a nice flow to the track. 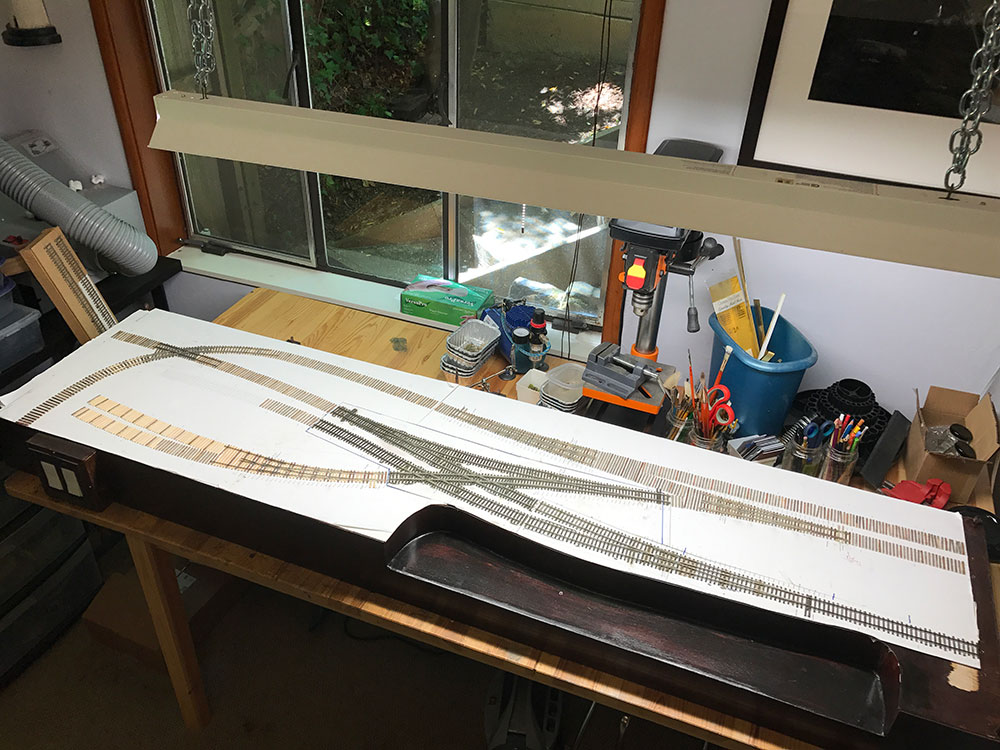 Missing sections of track are trivial to add and will be done after ballasting and landscaping the trackbed (during wiring). 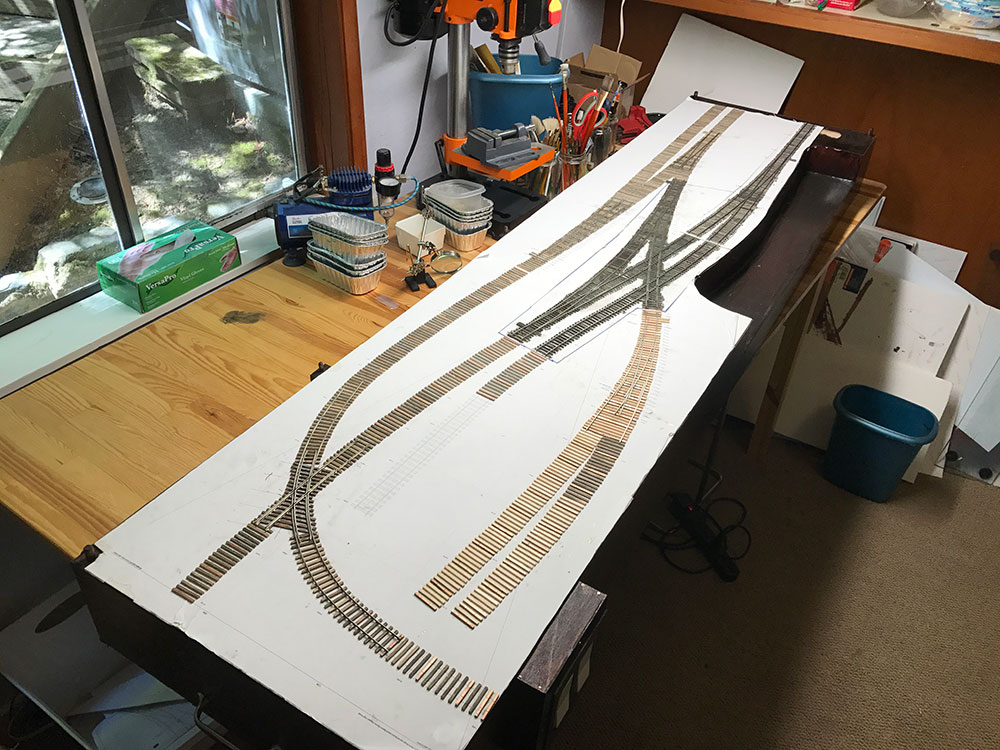 The star of the project was always meant to be this crossing and I’m very pleased that it turned out as well as it did – especially on my first attempt. The challenge will be isolating the sections for wiring. 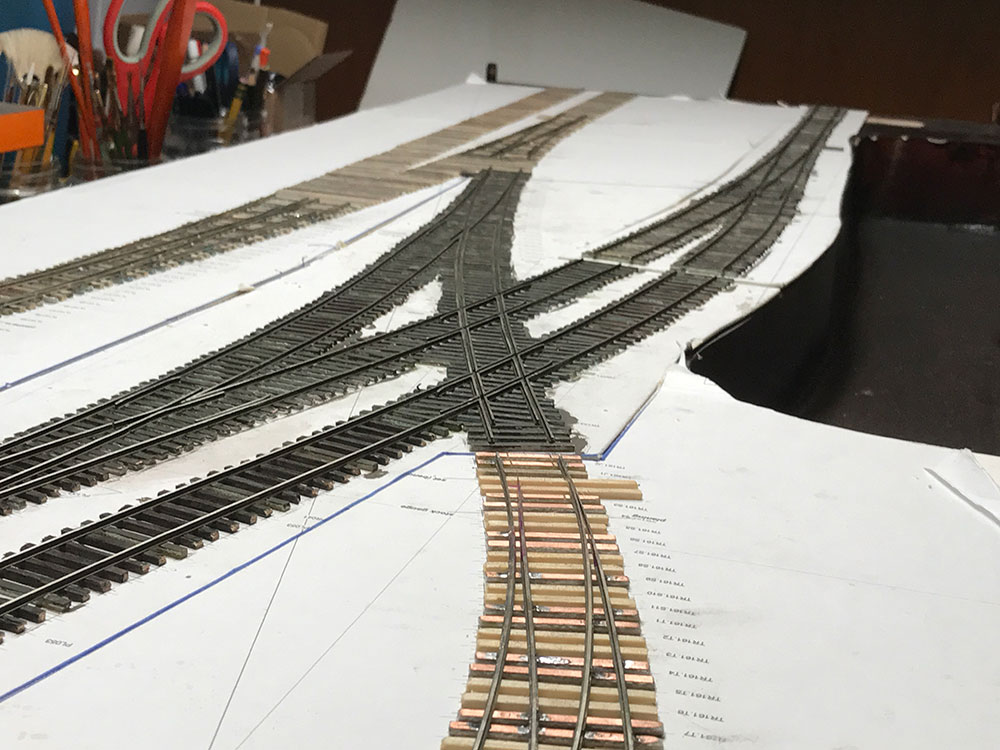 I could get rather philosophical about tracklaying but I’ll say more about it at a later date. What I would say though is that it took too long: 8 months! I did The Depot’s track in four weeks so I have no real excuse other than that it was a new method of tracklaying for me and so I felt a need to take my time. I can’t say I enjoyed the process. As much as I like track (it’s my favorite part of a railroad scene – I have hundreds of pictures of just track on my computer and I will travel hundreds of miles to photograph old trackwork) tracklaying is hard, complicated, tiring and stressful. I wouldn’t recommend laying your own track whatsoever. There were many days that I looked enviously at outstanding layouts that use commercial track (Lance Mindheim’s and Mike Confalone’s layouts spring immediately to mind) and declared ‘Why Kumar? Why?’. Nevertheless I felt that handlaying was going to be the best way to reach my own personal goals for trackwork. I’m not done of course but only at the end of this module construction will I know whether it was worth the effort.