Next stop on the trip was the settlement of Wendel, CA. I drove along the county road from Flanigan to Wendel which meant crossing the Nevada-California border. Until the border the road was gravel surfaced but it abruptly changed to a paved road as soon as I crossed back into California. As such I was able to drive fast between the two locations. The road pretty much follows the Modoc Line all the way to Wendel and I was able to spot it quite easily from the road. 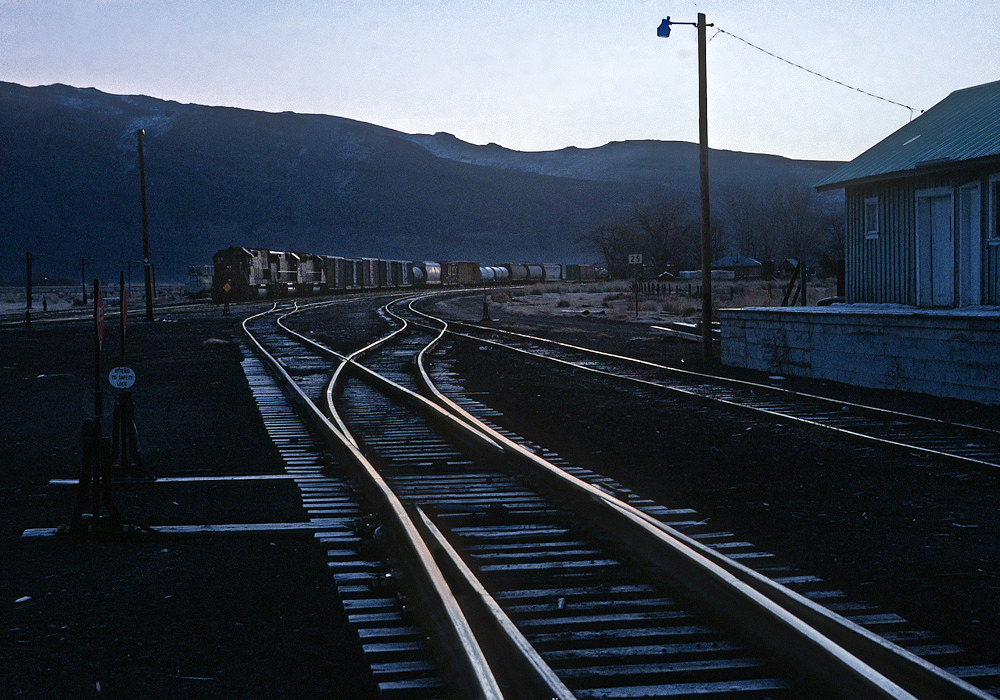 The settlement of Wendel was once an important stop on the Modoc line. Originally called Hot Springs and built by the narrow gauge Nevada-California-Oregon railway it was a through station for the line to Reno. The financially stricken N-C-O cut their line back from Reno in 1917 and then from Hackstaff to Wendel in 1922. From that point on Wendel became the southern terminus of the line that went as far north as Lakeview.

In 1925 the Southern Pacific came along with plans to build their Oregon cutoff line between Fernley to Klamath Falls and purchased the N-C-O whose line connected Wendel with the start of the cut off at Alturas in the north. They eventually converted the line to standard gauge but for a while the track was dual gauge. Wendel was also a station on the original Fernley and Lassen line to Susanville and Westwood (built and owned by the SP).

From the opening of the Modoc Line in 1929 Wendel became an important point on the line. It was both a junction for the branch to Susanville and a division point where crews were changed. It contained a two stall engine house, water tower, pumphouse, powerhouse and oil storage. It regularly housed and serviced members of the 4000 numbered AC-1 class cab-forwards and their successors.

The Modoc line stopped running through trains in 1997 but the track was left in place to run locals to Wendel. The track was finally lifted just a few years ago and most of the buildings have been raised. All that is left is the original depot building and a water tower.

The approach to Wendel

I took the county road between Flanigan and Wendel. According to the map there is some kind of military installation nearby and another couple of ghost towns called Stacy and Amedee Hot Springs. I was excited to get to Wendel so I didn’t spend much time looking for the railroad roadbed. However the scenery on the way was incredible with flat brush-land/desert on one side and these Martian-like hills/mountains on the other. I had to stop a couple of times just to marvel at their wonderfulness. I’m itching to get back here later this year and would love to go camping in the hills around this district.

I finally reached Wendel just after lunch but because I was hungry and without food I didn’t spend as much time on the site as I wanted to. I also didn’t do enough research beforehand so I wasn’t sure what I was looking for. Wendel was a big stop at one time and host to three railroads: the SP’s Lassen and Fernley, the Nevada-California-Oregon and finally the SP’s Modoc Line. After the trip when I got back home I was able to piece together the layout and see how those railroads occupied the site.

I found the original wye near the site of the engine house whose concrete remains were still visible in the ground. But most importantly I found the water tower spilling water around it and home to a colony of birds and rich plantlife.

Taken from Google Maps. These shots show the track before it was removed. We are so lucky to have this kind of record of the recent past!

Well hunger eventually drove me on to look for a local town to have lunch in and as a result I had to cut my visit to Wendel short. It is a place I will return to later this year and I hope to spend much more time here rooting around. I want to take a stroll to the end of points of the original sidings/spurs as well as take a closer look at the turning wye for the N-C-O (see map). For some strange reason I didn’t get as many pictures as I wanted to so I feel that this was a bit of wasted opportunity. Hopefully I’ll make up for it later this year.

Next the final post of this trip: Susanville and Westwood.